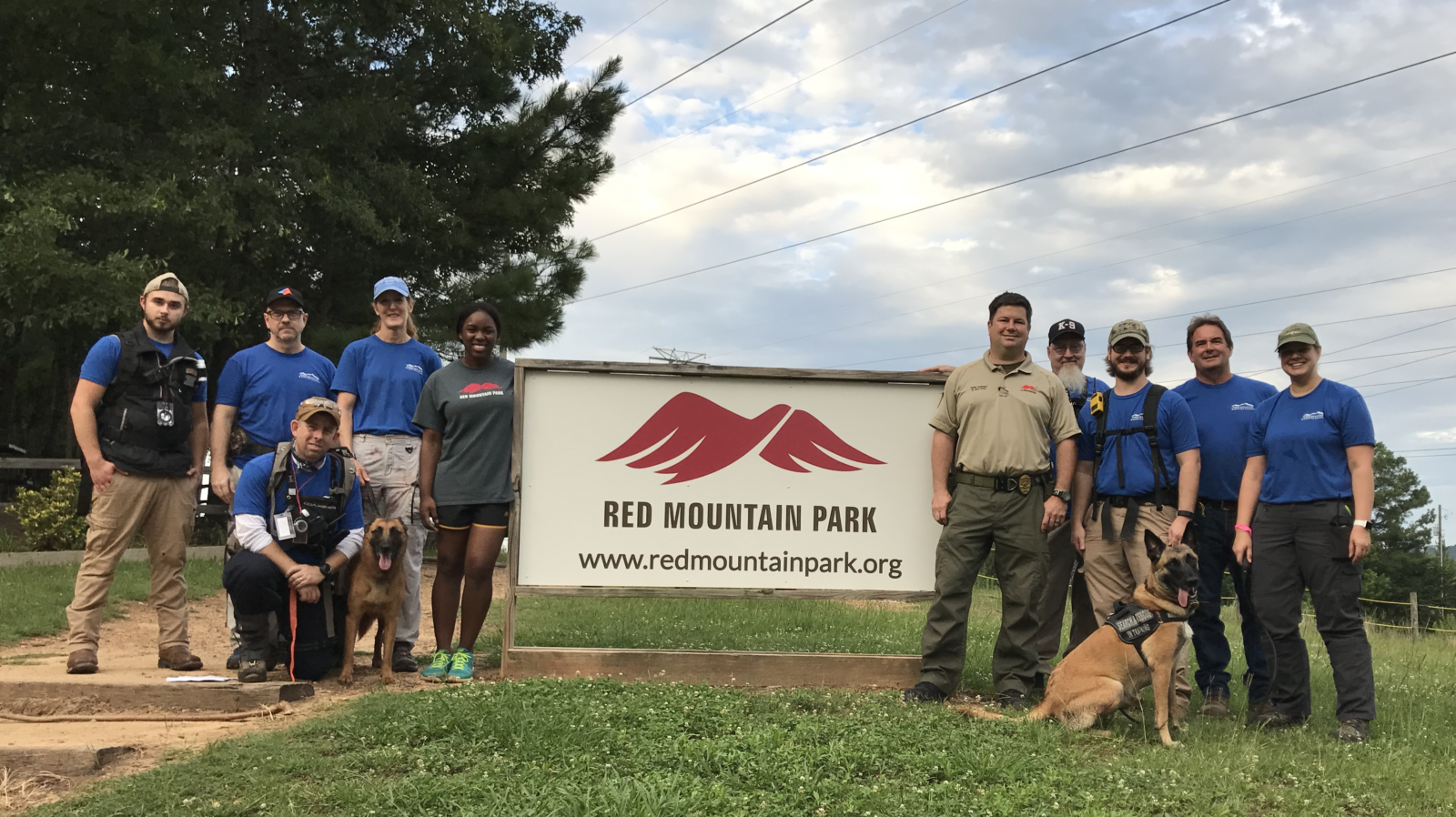 I used to do marketing for a sports foundation years ago called T.E.A.M., which stood for Together Everyone Achieves More. Actually, that acronym has been used by many organizations since, perhaps because it is one of those universal truths. And it’s especially true in Search and Rescue work.

That’s why Red Mountain Park recently invited us to train with their rangers and other staff; hoping to increase search capabilities in the future.

“I would say the biggest challenge in the past (in searching for someone who’s missing) has been the size of our park,” said Noel Watters, head Park Ranger for Red Mountain. “We have a lot of ground to cover. In the past our normal procedure has been to have coordinated search teams working the trails as quickly as possible.”

For those on our page who don’t live here, you might not realize that Birmingham is more than just a bustling metropolis. Nestled between downtown and some of the pocket communities, the landscape changes. On the outskirts of the proverbial concrete jungle is a different kind of wilderness; one where skyscrapers give way to towering cliffs and urban sprawl becomes sprawling canopies of trees and rocky overhangs.

Red Mountain Park is one of these hidden gems, attracting locals and visitors to its over 15 miles of hiking trails through 1500 acres of woods, open fields, and old mines that once fueled the steel industry this city was built on. This has been one of our regular training grounds as it provides a very realistic search environment and allows us to create scenarios we might actually encounter in the field.

“It only makes sense to partner with Red Mountain Search Dog Association as they train here regularly and know our property well,” says Ranger Watters. “The biggest benefit of having a dedicated team is being able to train with them on a regular basis and the knowledge they have about our terrain.”

This past Sunday we had our first quarterly training session with the park staff; a mock search that would be similar to a scenario that we would be called out for at any time. Meeting late in the evening by the entrance to the park, we could see several visitors still heading up the trails just a few hours before dark. So yes, what we were about to train was not far fetched at all.

We organized into two K9 teams. K9 1 was Kenny Powell and K9 Sadie, with Tim Haskew working navigation and communications, and Aidan Nichols as second flanker. K9 2 was Emily Smythies with K9 Bri, with Geoff White as navigator and communications, and myself as second flanker. Jimmy Pope stayed at base camp to record team communications and search times. Co-director, Stephen Burton worked with Ranger Watters to see how the park search teams were run and coordinate between their teams and ours.

Ranger Watters arranged for a volunteer to be hidden somewhere on the property, simulating a lost hiker. We gathered at base camp and proceeded to be briefed about the victim by her “sister;” what she was wearing, physical description, mental state, etc. just as you would on a real search. Scent pads with the victim’s odor were distributed to the two K9 handlers.

“I tried to set up the scenarios to be realistic. Something that could actually happen in the park. Using places where visitors could possibly wander,” said Ranger Watters.

We had a search area drawn out on the park map based on what they knew about where the victim had been, which we used to create a plan of attack; i.e., where we would start and what direction we would proceed in order to give the dogs the best chance at picking up scent and thereby hopefully finding the victim as quickly as possible. As tired as everyone was of the heavy rains that had fallen the last few days, the entire area was wet, which helps enhance scent. So it was a great set up for the dogs.

K9 1 was taken to the top of the mountain to the Point Last Seen, which was Ishkooda Mine #14. K9 2 walked up from base camp to the beginning of the trail head, starting at the bottom, cutting in just below the BMMR Trail (#3) and working our way up. Part of our mission was to clear an area (establish that the victim was not there) which helps narrow the search area.

Side note: One thing I noticed on our way up the trail was how visitors saw us and not only immediately identified us as SAR but also expressed concern that someone was lost or hurt. To me this is an added benefit of having a separate SAR team on the property because it alerts people to the fact that someone is missing, thus making them an extra pair of eyes on the trail.

K9 1 started down Trail #17, running between the #14 Mine and the Ishkooda #13 Mine, which would have been the most probable direction of travel base on where the victim had already been. At the same time, K9 2 covered the same boundaries from the bottom up, making our way toward the Adventure Area where the victim had visited earlier in the day.

Just as we made it to the Adventure Area, the call came over the radio that K9 1 had found the victim. She was up a steep incline and over the other side out of sight. Honestly a human search team alone might not have attempted such a climb and missed the victim. But K9 Sadie easily traversed the rocks to follow the scent trail, thus helping to show the benefit of adding K9s to any search. Quite simply they can and will search where many people might not attempt to go or might assume a victim couldn’t reach. The dogs have no preconceived notions of what a person is capable of; they simply trust their nose.

“I was very pleased with Sadie’s performance, today,” said Kenny. “There are no guarantees how long it will take your dog to find someone or even if they will. But today Sadie did exactly what she was trained to do.”

Even though K9 2 did not make it far enough to find the victim before the other team, K9 Bri was working scent down the mountain. As we cleared our area and continued toward the Adventure Area, K9 Bri was actually moving in the direction where the victim was found moments later. We also found some unmarked trails that had been created simply from people cutting through that area; trails that a hiker could mistakenly find themselves on and become lost. Areas such as these are critical to be aware of in a real search.

“Bri made me very proud today,” said Emily. “She ranged really well and searched with confidence. I think it was a great experience for her and the entire team.”

Upon returning to base, we had a debriefing, going over how each team worked and any insights we had into the process. Ranger Watters was amazed by how much ground the K9s covered and the efficiency with which the victim was found, even though he had hidden her in a normally inaccessible spot:

“The most surprising thing about how the canine teams work is the speed of the dogs. If the person is still in the area the dogs pick up the scent a lot quicker than I thought they would.”

Of course, not every search is guaranteed to go so smoothly or finish so quickly. But through this training, the Park staff was able to see how the dogs worked and how they could coordinate with us in a search.

“I am very pleased with the outcome of today’s event,” said Stephen. “Our team trains weekly to be a resource for Red Mountain Park and other law enforcement and first responders in our area. It was great to see how well our team and the park staff worked together. The results were exactly what we always hope for; victim found.”

One reason the park staff worked so well with us is that they already have a solid protocol for missing persons. Like any team, we enhance each other.

Before working with us, Ranger Watters had not been exposed to civilian K9 search teams. In fact, these kind of training exercises and demonstrations are important for educating the public on what volunteer teams like ours do and how they can be a resource for parks, law enforcement, and other entities that might be called on to search for missing persons. This is part of our mission as Red Mountain Search Dog Association.

“I would tell any park out there that was even thinking about working with a canine team to go ahead and do it. It will be much better to have the resource ready than to wish you had it if you needed it,” said Watters.

As you walk up the trail from the entrance you’ll see a sign that talks about Our Common Ground. It brings to mind that while our two organizations share a name, we share much more —a commitment to keeping the park safe for all who want to explore. Happy searching.